In Open Liberty 20.0.0.1, you can configure the Social Login feature to use Red Hat OpenShift’s OAuth server for authentication. In addition, there is a new MicroProfile Metric to measure CPU time, memory heap and response time.

If you’re interested in what’s coming soon in Open Liberty, take a look at our current development builds. Performance improvements through faster startups with annotation caching, and GraphQL support.

If you’re using Maven, here are the coordinates:

Or if you’re using Docker:

Or take a look at our Downloads page.

Most users of this will run Liberty in a pod; however, in the Authorization Code flow, Liberty can run outside the OpenShift cluster. In either mode, an optional JWT can be created for propagation to downstream services.

Using OpenShift as a provider differs slightly from other OAuth providers, it requires a service account token to obtain information about the OAuth tokens. Once the: client ID, secret, and token have been obtained from OpenShift, Liberty can be configured as shown below.

To enable the feature add it to the server.xml

Use of HTTPS communication requires that the server either have a key signed by a well-known certificate authority, which Liberty can trust automatically or that the server’s public key be added to the Liberty trust store. OpenShift does not come with CA-signed keys by default, so the Red Hat OpenShift OAuth server’s public key will need to be added. The most convenient way to do this is to specify an environment variable in server.env. That identifies the file containing the public key in PEM format. Liberty will read the file and add the key to its trust store.

A new metric, processCpuTime, which returns the CPU time used by the process on which the JVM is running. The MicroProfile Metrics feature provides information monitoring an application, such as CPU time used, memory heap, response time of servlets.

The new metric, processCpuTime, can be manipulated on Grafana to create a more accurate representation of the CPU being used. rate(processCpuTime)[1m] shows the average rate of increase in CPU time over one minute. Dividing this by the total number of CPU cores, we can see a more accurate percentage of the CPU used, taking into account the constraints.

The new processCpuTime metric is displayed on the /metrics endpoint with the MicroProfile Metrics 2.0 and 2.2 features. On the dashboard, a new panel can be created with the following PromQL query: (rate(base:cpu_process_cpu_time[2m])/1e9) / base:cpu_available_processors{app=~}. View full dashboard.

With all the machines cores being used and there are no constraints on the processors (32 processors) - The old version and new version display the same data.

Application startup time is now faster due to adding annotation caching to the core class and annotation scanning function. Depending on application characteristics, startup times are reduced by 10% to more than 50%. Applications with many jar files, or which use CDI or JAX-RS functions, see the best improvements: 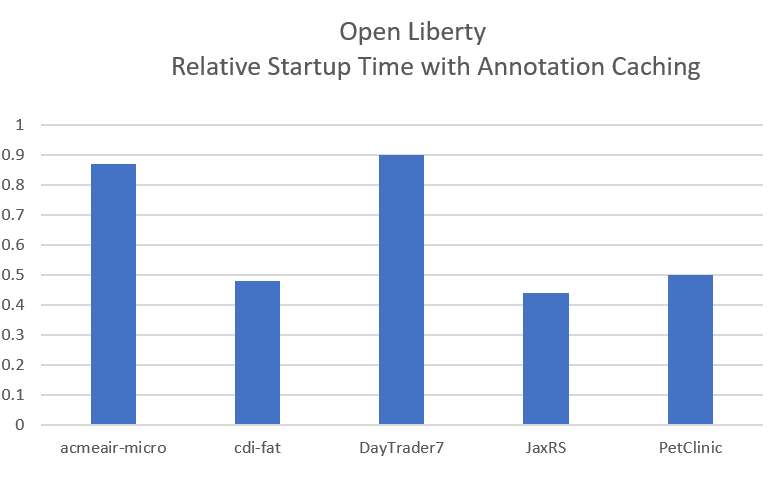 JavaServer Faces 2.3 contains a new feature to get bug fixes that are in Apache MyFaces 2.3.6. The jsf-2.3 feature pulls in the Apache MyFaces implementation and integrates it into the Liberty runtime.

To use the JSF 2.3, enable the jsf-2.3 feature to leverage the latest Apache MyFaces 2.3. release For more information about the JavaServer Feature, view the Apache website.

You can now also try out early implementations of some new capabilities in the latest Open Liberty development builds:

These early implementations are not available in 20.0.0.1 but you can try them out in our daily Docker image by running docker pull openliberty/daily. Let us know what you think!

You can now try out HTTP response compression.

Previous to this feature, Liberty only considered compression through the use of the $WSZIP private header. There was no way for a customer to configure the compression of response messages. Support now mainly consists of using the Accept-Encoding header in conjunction with the Content-Type header, of determining if compression of the response message is possible and supported. It allows the Liberty server to compress response messages when possible. It is beneficial because customers will want to use the compression feature to help reduce network traffic, therefore reducing bandwidth and decreasing the exchange times between clients and Liberty servers.

A new element, <compression>, has been made available within the <httpEndpoint> for a user to be able to opt-in to using the compression support.

The optional types attribute will allow the user to configure a comma-delimited list of content types that should or should not be considered for compression. This list supports the use of the plus “+” and minus “-“ characters, to add or remove content types to and from the default list. Content types contain a type and a subtype separated by a slash “/“ character. A wild card "*" character can be used as the subtype to indicate all subtypes for a specific type.

The default value of the types optional attribute is: text/*, application/javascript.

The Http Response Compression functionality has been designed from the following Open Liberty Epic: #7502. The design is outlined within the Epic for more detailed reading. The basic flow of the design is shown in the below diagrams:

You are now free to use GraphQL with Open Liberty!

In our latest OpenLiberty development builds, users can now develop and deploy GraphQL applications. GraphQL is a complement/alternative to REST that allows clients to fetch or modify remote data, but with fewer round-trips. Liberty now supports the (still under development) MicroProfile GraphQL APIs (learn more) that allow developers to create GraphQL apps using simple annotations - similar to how JAX-RS uses annotations to create a RESTful app.

Developing and deploying a GraphQL app is cinch - take a look at this sample to get started with these powerful APIs!

Available through Maven, Gradle, Docker, and as a downloadable archive.